To make the evening even more exciting, journalist Gilly Smith popped in to record a feature on Sutton Soup for the Delicious magazine podcast!  You can listen to it here if you’d like to:

We were all buzzing after this, the most successful Soup to date– here’s looking forward to April for another great evening of funding and food. 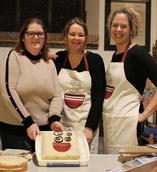 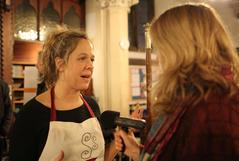 We were very happy to welcome back Lynne and Abigail from Free Cakes for Kids – not least because they made us three cakes to munch on, and one of them was a special Sutton Soup cake complete with logo!  It was amazing.  They told us how the £560 they won in October is helping them to provide more cakes to more children, and make things a bit easier for their volunteers, which was great to hear.

There was a very impressive turnout for the fourth Soup!  The good people of Sutton weren’t put off by the wintry weather and between us we managed to come up with £727, which is the largest pot of money given away at Sutton Soup to date.
The evening was very generously sponsored by Hype Fitness and The Wood Flooring Shop.

​We heard impassioned pitches from another four fantastic causes:

​It was a heart rending evening and quite a few people found voting difficult!  The giant £727 pot eventually went to Little Eden, and it was wonderful to present an emotional Dawn with her cheque.  She’ll be back in April to let us know how she’s put the money to good use!

And the Soup itself?  Delicious!  A big thank you to The Chilli Man for providing us with two tureens of his special Spicy Veg concoction, and our team pulled off a blinder of a Carrot & Honey soup which made a great alternative to his spicy offering.  All the vegetables were organic and supplied by Sutton Community Farm, who were with us again to give info about their superb weekly vegbox scheme.  Thanks for the veg guys!

Bread, as ever, was supplied by Heather and The Bread Club.