We were very excited to hold our first event in St Nicholas Church.  You can never be sure how things will go when you've never done them before but it was a wonderful evening with a great atmosphere!

The four pitchers were:

Each group delivered an impassioned pitch to our audience for the fantastic pot of £490 that was up for grabs on the night.

Then we enjoyed steaming mugs of Potato & Leek Soup with slices of Spelt Bread while we considered what we had heard.
In the end the money went to Sutton Night Watch by a considerable majority of votes.

Dean and Steve Killick from the Night Watch were so happy to have won, Steve was moved to tears!  They'll be coming back

at our next event to let us know how they're getting on.

This night was sponsored by Waitrose, The Co-Op and local businesses Mi Move, Gelling Risk Services and  Condell Ltd Building Supplies.  A big thanks to them as without their input we couldn't have gone ahead.
But of course the biggest thanks of all has to go to the people who came along and paid their money on the night - it's your sense of community that makes the Soup happen!  We hope to get as good a turn out at our next event - look forward to seeing you all there. 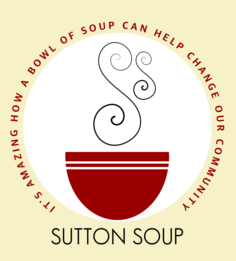